Ten years ago my husband and I decided to see where our new relationship would lead. Our actual anniversary was on Friday, but we were both so tired from work and life in general, we ended up knocking out. (#lifeafter25?) To make up for such misbehavior, we decided to celebrate on Sunday by going to Salsa con Fuego, whose brunch my sister recommended months ago.

To preface this, I had made my return to the gym after missing my Sunday class three weeks in a row (two of which were due to my trip to Shediac, the third was due to a mild hangover :/) so when I came back home I was not only drained, but starving.

Salsa con Fuego’s brunch is served buffet style with a free drink included (mimosas, bellinis, soda, or juice). We opted for bellinis, which were waiting for us on our table after we served ourselves.

I’m usually not a fan of all you can eat buffets because all I can eat in one sitting is really not a lot. But, like I said, I was famished. I piled my plate up with almost everything I saw – shrimp, pernil, rice, pasta – you name it.

After stuffing my face,    I had two servings of fruit and flan. “Why not?!” I said. “I’ll be fine!” I said.  I was not fine. I had definitely eaten away too much and moved at the pace of a sloth trying to make the under 30 min trip back home. Smh.

Besides an admission of my boundless gluttony, this is also a testament to how good the food was. Because it’s a buffet, you don’t have a lot of interaction with the staff, but our waitress made sure our water glasses were full and was generally very polite and friendly.

Salsa con Fuego itself is an expansive venue with lively portraits of Tito Puente and Celia Cruz adorning the walls. There were people of all ages there and several people celebrating birthdays and other special occasions. I didn’t take enough pictures, I was too busy stuffing my face.

Admittedly, I was a little nervous because of the mixed reviews on Yelp, but I am so happy we decided to go here for brunch. So worth it! 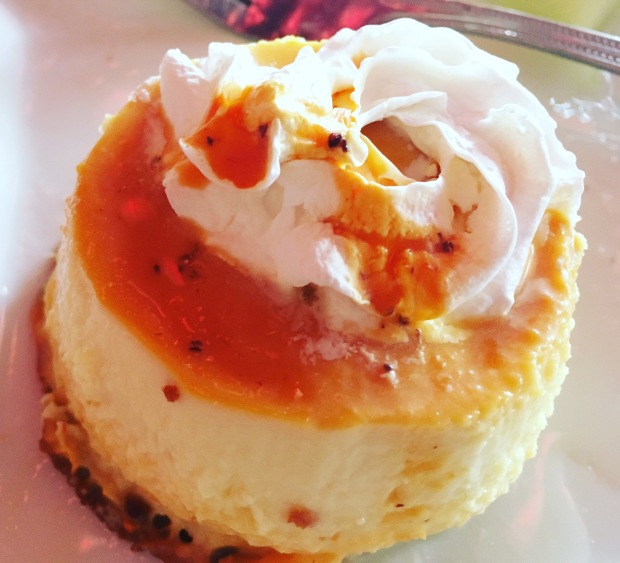